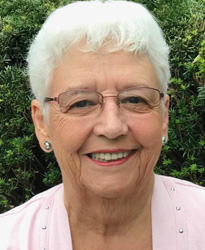 My bridge career began when I joined an after school bridge group during my senior year in high school where I learned the Culbertson system. I played social bridge with these rules until a neighbor taught me the Goren “Point Count System”.

When I moved to King of Prussia I became close friends with another neighbor, Bernice Goldstein (already a life master). Together, we studied 5 Weeks To Winning Bridge by Kaplan-Sheinwold. We played KS with “weak no-trumps” for a long time.

Bernice and I played duplicate bridge from the early 1970’s until she retired to Florida. In the 70’s there was a club game at “UNIVAC” every Monday. The director was Alan Brooks who was known for his wonderful temperament. I became friends with a lot of players at that time. That is where I met Carl Berenbaum, who is now my regular partner. It only took 40 years before we played together.

I enjoy the mental part of the game as well as the social aspect. I have many partners to thank for helping me achieve “Emerald Life Master”.