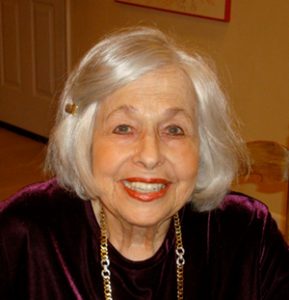 PLAYER OF THE YEAR AWARD
(0-500 MASTERPOINTS)

The Jane Segal Player of the Year Award is given to players who are members of our District for the entire year and who start the calendar year with less than 500 masterpoints and earn the most masterpoints in District 4 tournaments.

The winner will be recognized at the Valley Forge Regional and will receive a certificate and a $100 cash prize.

Jane Segal has been teaching bridge since 1970. She founded the J & J Bridge School in 1973 which continued for 37 years. Jane is proud of the hundreds of students who play regularly who started with her.

Jane has coached bridge teams at nine country clubs (some for over 20 years) and taught at three others.

Jane has won many regional events. The first was in 1969 and made her a Life Master. She has placed in the top 10 in 4 national mixed events and more than a dozen women’s events. She is an Emerald Life Master.

Jane has served on the Board of Governors for 30 years and has served as President of Unit 141 and District 4.

District 4 Masterpoint Races have been canceled for 2020/2021 due to the small amount of face-to-face play in our District. We all hope we will be back competing in 2022.