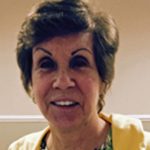 I started playing bridge as a 12-year old, with my twin sister and parents. During my 31-year Army career, there were many years without bridge in my life, but when I retired in September 2004, a friend recommended Dotty Ehling’s club in Warminster; and I joined the ACBL in February 2005. For the first 4 years, I never entered a gold-point event, which I regret now, but no one told me to start collecting gold early – the advice I got was: enter the lowest event possible at the tournaments. Gold points were slow in coming: 1.53 here, 2.90 there, until I only needed 0.08 for Life Master, even though I had a total of 650 points. Finally we got that one big win at the 2016 King of Prussia tournament (9.94 gold) which pushed us way over the top (thank you Carolyn and Sheldon Per). Most of my gold was earned with Dave Hallman, and most of my silver with Jean Harney. I have both partners to thank, along with my parents who got me started.