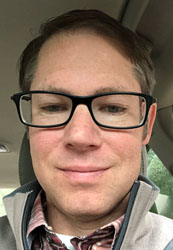 I began my bridge journey around 1999 when I started reading the bridge column in the newspaper. It was my first exposure to the game and I was fascinated by the logic presented in the solutions. In 2001 I borrowed a book for beginners from the Los Alamos bridge club and started playing duplicate. I played for about a year and then moved away to a town with very little bridge. I returned to the game in Indianapolis in 2003-2004 before moving and getting married near Scranton, PA. I started playing again in Toledo in 2009-2011 with the goal to become life master and picked up 200 points. Moving to Corning, NY slowed my progress, but I continued to play regional tournaments with my wonderful Toledo partner. We were moderately successful, picking up points a few times a year including all the necessary silver and gold. In 2017 I played a few online tournaments, bringing my total to 299.94 masterpoints. It was very important to me that I win my final points with my amazing partner across the table. We made it to the Pittsburgh Roni Atkins regional this year and got my final points in the first session we played. It was a fantastic feeling, almost 20 years in the making. I would like to thank Sandi Bellner from Toledo for being my partner all these years. We had a great rapport at the table with Sandi being the best sacrifice bidder I ever played with. She was right 99% of the time, it was amazing to witness. It was very special to win my last 0.06 points with her and I am elated to have reached this milestone. There were many people who helped along the way, especially Ralph and Karin Raber for improving my fundamentals and the late Bob Harlow who was an extremely patient, kind and generous teacher. As long as I play the game, I will always remember Bob. Thank you to the Toledo bridge club and everyone I met along the way.

I hope to play more bridge in the Corning area, get more involved in district 4 and attend more tournaments in the area. The game is amazing and I hope to play it for many more years.