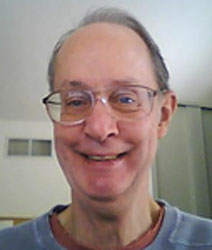 My wife Dale and I began playing duplicate at Raffels bridge club nearly 30 years ago. Navigating the bridge social scene was daunting; one had to find the non-smoking games to survive, for example. But it was all worth it the night I won a club Individual, bidding an aggressive slam with the owner as my partner. Sue Raffel made my day when she said, with her patented deadpan delivery, “I could take you lots of places.”

Dale was my first and best partner. As we learned the game, our ambitions grew and the search for Gold Points began in earnest. One autumn our good friend Dennis Cleary from Syracuse brought his regular partner to the Lancaster Regional to help us, hopefully, earn some Gold in the Flight B Swiss.

We struggled early, but in the penultimate match were dealt a “distribeauty”. The competitive auction reached the five level, and with her customary fearlessness (I would have to play the hand, after all) my wife bid five vulnerable spades over the opponents five vulnerable hearts. Their double was emphatic, but the bridge gods were with me in the play and we racked up +850. When the comparison reached this board, I heard Dennis say “850” and my heart sank; it seemed we had pushed the board. But no! We were +850 at both tables; our wonderful teammates were doubled in five hearts you see.

On the strength of this match result, we reached the overalls and earned our first Gold Points. Now we were hooked, becoming regular tournament players for twenty plus years.

Our first Regional Flight A win was at the Sunday Swiss in Harrisburg (1996) with our good friends, Al and Estelle Ronderos. We had already bought our Flight B entry when Doug Grove called for a volunteer team to play;up” at his expense. We were happy to oblige! The only bad moment came when, with about ½ hour to resumption of the event, the Chinese restaurant we visited at the break admitted they failed to make our order. They threw bags of food at us as we left, and Al and Estelle stored their meal, still hot and pungent, under the table for the always fraught “first match after dinner. The opponent lady came to the table and promptly exclaimed,;What is that terrible smell!? It smells like garbage!;

A number of my Regional wins were with Bill Grosnick, a fine player and sometime Professor of eastern religions. Learning partnership skills (we had notes , can you believe it!) was an important part of my bridge education.As my preempts became more undisciplined, Bill may have pulled a face on occasion, but never lost his equanimity. Early in our partnership he did get testy when our opponents in a Regional Swiss were late getting to the table after a dinner break. Bill gave them a lecture on bridge etiquette that was really quite eloquent. I don’t know if Matt Granovetter and partner actually took it to heart though.

It seems like it’s taken forever to reach the 5000 MP milestone, but I take pride in qualifying to represent the District in Flight A NAPs four times with four different partners – Steve Goldstein, Marty DeBruin, Ev Young and Andy Kaufman. And of course winning the Flight A Grand National Teams in New Orleans in 2010 with Rick Olanoff as my partner, and stellar teammates Howie Cohen, Corey Krantz, Elliot Shalita (Captain) and Andy Kaufman.

Rick Olanoff deserves a special shout out for partnering me at the GNTs, as he was a last minute pickup when my regular partner had a conflict for the District qualifier. Thank goodness for BBO ‘s platform, which gave us enough game experience and bidding table practice to perform well in New Orleans. After a shaky start (we were the 16th of 16 teams to qualify for head-to-head play) our team rolled to a succession of double digit victories, and Rick and I had a blast.Over the years I’ve had the opportunity to play with District Four luminaries such as Charlie Gray, Howie Cohen and Craig Robinson, learning something from each. I will share this: when facing the crucial bid or play on any deal, I suggest you follow Howie Cohen’s mantra – “God hates a coward!”

The 5000 point milestone was reached on Friday the 13th (October) at the Bala Sectional. My partner for the occasion was the lovely and talented Gail Bell, whose awesome declarer play landed us second overall in the Friday afternoon pair game and pushed me over the top. Thank you, Gail!

All in all I have greatly enjoyed being part of the unique subculture of bridge. Where else would one hear a snatch of conversation that begins with You hold….” and ends with “By the way, when is Lancaster?” Good luck to all; I look forward to seeing you at the table