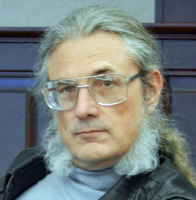 I first played bridge in 1961 when I was 8. I was visiting my paternal grandmother in Pittsburgh. One of her regular bridge foursome couldn’t make it one afternoon, so Gran sat me down opposite her, gave me a rudimentary lesson, and we played. The three ladies were very indulgent and I had a great time. I already loved card games and this experience immediately hooked me on bridge.

When I got home, I started reading my parents’ bridge books, Goren’s manual, Simon’s Why You Lose at Bridge and the daily bridge column in the local paper, but there was no one to play with. My parents and I were only 3. We needed 4. I never played with my mother at all and I didn’t play with my father until he was in his seventies. But during the summers when I was in high school I could sometimes pick up games with my friends Walker Hamilton, Beth Hamilton and McKayla Dockum.

When I got to Bowdoin in 1970, I found plenty of bridge players for the first time in my life. John Mace and I partnered against Steve Wendler and Noel Webb in Wendler’s room almost every night during our first year. Then I met Ken Santagata and discovered that I had to unlearn everything I knew about bridge and relearn it again from scratch. Gran believed in 4-card majors, sound opening bids, sound overcalls, 16-18 no trump, strong twos, few if any preempts, and taking no chances. Stone-age Goren. But Kenny taught me 5-card majors, light overcalls, strong two clubs, weak twos, and the basic Kaplan-Sheinwold system. I developed a regular partnership with Jim Burke. We did quite well together in the weekly tournaments in the student union, directed by Kenny and taken seriously by no one. For my first 2 years at Bowdoin, I played about 8 hours a day, every day. Then it dawned on me that I was really there to get an education, not to play bridge. So, at the end of my sophomore year, I quit cold turkey. Jim was graduating anyway. My GPA immediately went from 2.8 to 3.6 and stayed there.

Except for a few sporadic games in grad school, I didn’t play again for 18 years. When my first wife gave birth to our second child, she took an extended maternity leave at my parents’ house in Kennett Square, Pennsylvania. But after a week I had to return to work in Syracuse. Finding myself home alone for a few weeks until my family got home, I buzzed through the Yellow Pages looking for something to do in the meantime. I found a place called the Bridge Studio, so I went down there one night just to see what was what. They played duplicate. Serious duplicate. But the owner, Bill Barrinngton, was very friendly and welcomed novices like me with open arms. Again, I was hooked.

Serious duplicate bridge worthy of tournament play in the ACBL is a whole other animal. For the second time in my life, I had to unlearn everything I knew about bridge and relearn it again from scratch. My new partners and I experimented with aggressive, creative, and scientific bidding methods. I learned how to count cards the right way,I did well and won the Bridge Studio’s novice trophy in 1991. That fall I attended my first North American Bridge Championships in Indianapolis and won the 0-300 Zip Swiss with a pick-up team. I liked picking up partners whenever I was on the road, because I could learn new gadgets and strategies from them.

In April 1992, when I had only 95 masterpoints, my first wife and I split up and each of us became a single parent with financial difficulties. I didn’t play much bridge until July 1993, when the personal, parental, and financial problems had pretty much sorted themselves out. Then I returned with a vengeance, determined to make Life Master ASAP. One Friday night in September 1993, when I had only 111 masterpoints and only 5.2 gold points, I announced at the Bridge Studio (where I had just played a 46% game with one of my regular partners) that I was going to drive directly from there to the Regional in Springfield, MA, pick up a partner, and get all the rest of the gold points I needed for Life Master. No one believed me and several people laughed. But I picked up John Hackett, an expert from Maine, and when I returned home on Monday, I had 137 masterpoints including 30.72 gold. All the skeptics and mockers at the Bridge Studio ate crow.

Because I still had a lot of family responsibilities, I didn’t play as often as I wanted. When I finally made Life Master at the Buffalo Regional with Carole Sutphen as my pick-up partner in October 1995, I never saw 300 (which was all we needed in those days). I jumped from 298 to 304 masterpoints. By then I had 69.50 gold. Still able to play only occasionally, I didn’t make Bronze Life Master (which requires 500 masterpoints) until September 2002 at the Delaware Regional with Pierce Smith as my pick-up partner. In 2006 I wrote and published How I Became a Life Master Playing the Weak No Trump, a system book presenting very aggressive bidding methods. For a great variety of personal and professional reasons, I hardly played at all after 2006, having accumulated 716 masterpoints.

When the COVID-19 crisis hit in March 2020 and I could no longer watch sports, hang out with friends, visit people, take yoga classes, go to libraries, attend conferences, etc., I decided to try online bridge again (which I had not liked much when I tried it in 2004). I still had only 776 masterpoints (including 234.85 gold), having gained only 60 in a little over thirteen years. I logged onto BridgeBase.com and loved it. I play with a robot partner against two robots and earn about 1 masterpoint per day. At this rate I should make Silver Life Master (which requires 1000 masterpoints) sometime this fall. When that happens, I hope that the pandemic is kaput so that I can celebrate with a big party.