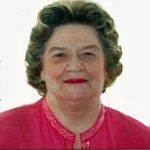 After being a widow for 2 years, I met Charles Stevens who became widowed 2 years after we met. Among other things, Charles was a bridge player. He had had a hiatus of 20+ years and, now that he was semi-retired, he was playing more often. He would describe hands he had played hours ago and sometimes days ago. I was so interested that, when I found a new Sheinwold’s 35 days to Winning Bridge (the cover had been removed and the book cost $.50) at the local farmer’s market book stand, I purchased it. As I read it, I became more intrigued, called the local bridge club and took a few lessons. After the last lesson, we drew straws for partners and then played in the novice game. Imagine my surprise and delight upon learning my partner and I came in 1st. I was HOOKED! The next novice game was 2 weeks hence. I agreed to play and the director would arrange for a partner.
Doug Ober was the partner. He had learned to play on the computer and, I believe, I was the first person with whom he played. We shared a passion for the game as well as the desire to get the fundamentals (Bridge 101 I called it) down pat. He was my 1st steady partner and played together for 3+ years. We played in the twice monthly novice game, improved and then played weekly in the regular game He often said “Trust is a must or your bowling game is a bust. Trust each other and play as a partnership we did.
Charles invited me to go with him to Raffles—he to play and me to kibitz. He felt that by listening to the bidding, watching declarer and defensive play I would gain a bit more knowledge. I kibitzed Elsie, his partner. She was a lovely, feisty lady who would say “Come and get me” when she was declarer. Before her LHO or Charles would play a card, she had a card detached from a suit and 98% of the time it was the right suit and card. I was amazed. The next time I went to Raffles; again to kibitz, the wonderful Sue Raffles arranged a partner for me. I protested that I was willing to kibitz but she pleasantly and kindly insisted that I play. I don’t remember much of what happened that day but do know my poor, suffering partner graciously explained the WHY of what I did or should not have done. Those Sundays were mentoring or Pro/Am games for me. I learned something every time—much of which I still remember. To this day, I am grateful to Sue Raffles and miss her very much.
Doug, Charles and I studied conventions—one at a time and, when we understood it “upside down, inside out and backwards” we would add it to our convention card then go on to another one. Charles and I married but Doug and I remained steady partners until his job was changed and he didn’t have the time to play. Charles became my 2nd steady and most favorite partner. Our partnership lasted 9+ years. We traveled all over the United States, Canada, Mexico as well as a few other countries—sightseeing, visiting, and playing in local games or tournaments.
In Georgia we met a couple who asked us to play in Knock Outs. Not knowing what they were, Charles declined. Once we learned about them and met other couples who asked us to play, we did. We won Flight C Knock Outs in 2 Regionals with couples we met. This helped us win almost all our needed gold.
My passion for bridge continued. Charles referred to me as his bridgeaholic. Tournaments are exciting. We played against some of the great bridge players and met people with whom we arranged to visit or play with in other tournaments.
After Charles died, I continued to play in local clubs and some tournaments. This helped the grief process. One day a novice asked me to play. As I enjoy playing and am willing to play with anyone, I agreed. I wanted to share whatever knowledge I had and to give back. I had played with excellent players in Philadelphia and asked better players in Reading to play with me at least once. They did and shared their knowledge with me which was much appreciated. Carl Cronrath, the novice, became my 3rd steady partner. Like Doug, he had a passion for bridge, desire to learn and understand the game. We played together for about 6 years in local clubs and tournaments. I was already an EasyBridge presenter and an ACBL Accredited Teacher. We also became directors, started a game endeavoring to reach new players and incorporate them into the bridge world. I directed and he taught. The last game I directed had 16 tables. How gratifying! Carl has retired and is now managing a club in Fla.
One of the most moving moments in my bridge life to this point was the fact that two of our players won the Flight C NAP. They were sent to St Louis to play in the Nationals. One of the pair, Betsy Kunkleman, took lessons from us and played in most every game. I don’t think she will mind if I mention that she was 78 or so when she started with us and never played bridge a day in her life.
It is with abundant gratitude that I thank my 3 steady partners as well as the many other partners I have had over the years. Some have passed on but many remain. I can’t name them all but I sincerely enjoyed each and every game in which I ever played with them.