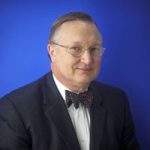 In 1970 my brother, several of his college buddies, Dudley Hendricks and I learned Precision. Until then I had played socially using 4 card major openings.

Our team played competitively until my brother left the area to go to grad school. I did not play competitively from 1971 until late 2008. In 2007 my brother visited from the left coast and we put together a social duplicate game which was enjoyed by all. This event grew organically into a social non-sanctioned duplicate game that plays monthly. I now have 100 e-mails on the list. We usually play between nine and twelve tables. Several of those who started at Bridge-O-Rama have graduated to playing in sanctioned games.

In 2008 Dudley Hendricks asked if I would be willing to learn Precision to play competitively with him. We started practicing every Tuesday evening. It took us over a year to master the system. We would have dinner and then do two or three Bidding Box exercises from the ACBL Bridge Bulletin.

We started playing at Dotty Lou’s Boutique and Bridge Studio every Sunday in December 2008. Because of the weak no trump, asking bids and strong 1 club opener we did reasonably well.

The high point of my career to date is playing at the Regional Knock Outs in Philadelphia attached to the world tournament in October 2010. At the time Dudley and I each had earned less than 6 master points. Fern Herman and Patty Bassman asked us to play Knockouts with them to use our low point total to play in a bracket (as Patty put it) against people we can beat.”

We won our bracket and earned 10.87 gold points. Dudley would like to know if that is some kind of record for first time gold point winning or a member point total where gold was two thirds of our total.

The ACBL serves me very well and I am pleased with the District 4 administration. I very much enjoy and value the game at Dotty Lou’s Boutique and Bridge Studio. I also enjoy playing at Barbara Patterson’s Ami Bridge game for 299ers. I read the Bridge Bulletin cover to cover every month.