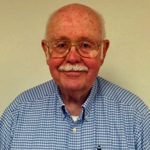 I am a 77 year old retired Presbyterian minister, who played my first duplicate game in June, 1959, in my hometown of Abilene, TX. I shortly thereafter went to Europe (U.S. Army) and earned 40 points in three years, then played almost no bridge at all for ten years (graduate school and first pastorate). Moving to Mobile, Al in 1972, I became a life master in January,1976, before moving to Delaware later that year. For several years in Delaware I played some, then directed the unit game–slowing adding up to 750 points. When asked to assist a friend to get his Gold Points several years ago, I again began to play regularly, making 1,000 in May, 2007. Since then, I have accumulated the additional 1,500 points, playing regularly, and earning ca. 200 points a year.
Some of my favorite partners have been Jeff Koltenuk, Jan Garber, Alan Horowitz, and Carla Wasniewski.