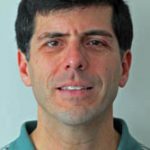 I learned bridge around 8 years of age, my parents both played socially and I wanted to learn, so my mom would have me as her partner when she played with friends or family and my dad wasn’t available. I played a little in college (I was a member of Lehigh University’s bridge club in 1989 or so, but it wasn’t a very active club). It was while playing in volleyball tournaments in the mid to late ’90’s, when some of my teammates and I would play bridge between matches, that I learned about duplicate and the ACBL. I didn’t join at that time, feeling too busy with work and other hobbies, but in 2010 I did join, part of putting my life back on track after major life changes. I still don’t get to play as often as I would like, daytime games at the local clubs still conflict with work (my work now involves race cars; it used to be computer databases – did I mention major life changes?) but I have met some great people through the partnership desk at both sectionals and regionals, and found an excellent teacher at the Yorktown club, Bobbi Gomer, who has taught me much and encourages me. It was her encouraging me to play in a Pro/Am at the Yorktown club a few weeks ago, where I was partnered with Ellen Gordon, that I got the black points I needed to push me into the club master category. It will be nteresting to see if I can get another couple of good games at Yorktown I may reach “section master” soon. All I need is black for that, too.