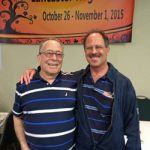 The 80 year old Life Master
Joseph Eskin is a club director in Harrisburg. He has accumulated over 1400 master points. Joe is over 80 years old.
For multiple reasons he has traveled to almost no tournaments for 20-30 years. Joe needed 13.3 Gold points to become Life Master.
Joe’s son David decided that, with Harrisburg Split Site Regional being local and a workable 10/2:30 start times, he would play with his dad to try to cut the amount needed.
On Tuesday afternoon they played. They ended up with an overall scratch worth 6.83 Gold. Nice game, home they went. Half an hour later, the Split Site comparisons were done, and they had advanced to first overall in B (0-2500) across both sites, 12.37 Gold. The call to Joe with the update was received with delight. The callback from David did not arrive until 10:30 that night. His response was a sarcastic “Damn, I guess we have to play again this weekend”.
Saturday they did. A small Flight B overall place netted another 2.49 Gold, producing our newest 80+ year old Life Master.
Moral: It’s never too late to pursue that elusive LM goal.