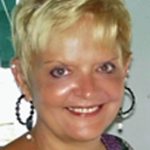 A friend of mine called me in the winter of 1996 asking me if I would go to bridge lessons with her. Now, I had played pinochle in college (and spent so much time playing it instead of attending classes, that I could probably have earned a degree in it), but knew nothing about bridge (I actually thought it was for old ladies with big hats and maybe winos). Having a life-long problem of saying “no” to people, I agreed to go with her to a Senior Center (which was exactly where I knew it would be taking place). Of course, after being there about twenty minutes, I was hooked.
My friend and I decided, after a few months of taking lessons, to try the big time, and showed up at a local duplicate game. A player came over and introduced herself and asked how long we had been playing. We said only a few months, but we thought we played a good game and beat everyone at the “Senior Center”. She laughed and said, “well, you will not come in first here and it will be a very long time before you beat players here at our club”. Well, she was wrong….we came in third that first night and thought, this is easy, and not as intimidating as we imagined. Well, she was also right….we came in last after that first night, for months. I was working full time so didn’t get much time in at the bridge table, but kept at it whenever I could.
About two years later, the women who owned the club asked me to sit for the director’s test. Soon after, she became sickly and gave up ownership. One of the members took charge, incorporated, and the club, The Cape May County Duplicate Bridge, became a club owned by its members. He was President for two three year terms and then asked me to take over. I am presently on my 4th three year term.
I enjoy the game, the competition and the people. In 2003, I entered our club in the One-Star Club competition and won. I have enjoyed planning parties for all the holidays and starting a yearly club newsletter and website. I have been fortunate enough to play in bridge in Atlanta, Nashville, New Orleans, New York, Mesa, Las Vegas and Italy.