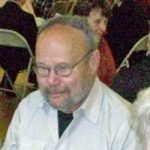 When I retired about 5 years ago my wife was concerned that I might not know what to do with myself, as I had only worked all my life and never developed any hobby or significant leisure activity other than reading and listening to music. While I was slowly sinking into a lazy depression she found in the local paper that there was a series of bridge lessons for beginners in the adult education program at a nearby high school, and she registered me. She also joined, I guess to make sure that I was indeed attending the lessons. She had played in college, but not kept it up. The lessons were given by Dottie Ehling, and later on I found out that she owned a bridge club in the area and was one of the area bridge icons, having been playing and teaching bridge for next to ever.

I found the game challenging and fascinating from the very beginning, and after a short period of occasional playing social bridge I decided to take more lessons and get better. At these lessons I also had the good fortune of finding a fellow student who turned out to be a neighbor, and become my main bridge partner. Together we timidly ventured into trying duplicate bridge at a local non-sanctioned club about 2.5 years ago, gradually became more confident and the addiction took over.

My wife also took up the game again and I dragged her to play duplicate with a friend. Unfortunately she is not as committed, but she remains supportive and continues to listen patiently to my bridge problems and is ready to discuss all the hands I just played when I come back home from a game.

Pretty soon bridge players were the majority of our social group, and bridge dominated my life, including spending Christmas/New Year vacations at some regional in the south. After getting my first master point in February 2012, I got addicted to trying to reach higher and higher levels. Now my goal is that of reaching Life Master in the next two years. Probably too optimistic, but I will give it a try. I continue to find bridge incredibly stimulating and always challenging; hopefully it will also help in keeping away brain decline as long as possible.

In my quest for master points I owe a lot of gratitude to Dianne, my wife, who has been supportive even when practically becoming a bridge widow, to Jeff, my main partner with whom I shared great satisfactions and crushing defeats, to Dottie, my first teacher, and to my current one, Jane Ball, who is also willing to play with me and to endure patiently my naive mistakes.