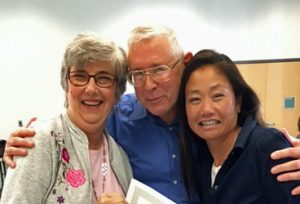 Now that I am retired, I am spending a lot more time playing bridge. I learned the game decades ago because my mother believed knowing how to play bridge was as important to succeeding in college as good SAT scores. She adored the game. I always helped Mom prepare when it was her turn to host the bridge ladies for an extravagant lunch and an afternoon of play. My job was to iron napkins and tablecloths, wash the good crystal and polish silver.

Based on my childhood experience, I came to associate bridge with liquor, linen and lasagna. Add a few glasses of wine and/or sherry and it was amazing my mother’s bridge group was coherent enough to actually play bridge.

When my mother sent me to bridge lessons, she hoped it would help me find social success in college. I found other interests in college and put bridge on hold.

Fast forward to 1990 when I started playing bridge with a small group of ladies in Charles Town. Naomi Moses, my bridge span into the modern era of bidding, invited me to join her group for an afternoon of play. I welcomed the invitation and decided to skip breakfast to save room for a lavish lunch a la my mother. I arrived at Naomi’s home and viewed the kitchen table, adorned only by two decks of cards and a score pad. No buffet. No lasagna. No silver cutlery. The only food was a bowl of cantaloupe squares pierced with toothpicks.

I could barely hear the introductions of the other players over the rumblings of my empty stomach. These ladies were far more interested in teaching me “weak two bids”, “negative doubles” and “strong artificial 2 club opening” than feeding me.

I loved it. Unfortunately, working full-time and raising a family cut into my bridge time.

Now, freed of work and young children, I am back at the bridge table. There is quite an active group of bridge players in the area, ranging from weekly bridge games among friends to more structured, duplicate games in Martinsburg, Charles Town and Shepherdstown.

I am one of the youngest players at my regular bridge game in Shepherdstown. No matter—these ladies are sharp! Recently, my 93-year old partner (who has been married longer than I have been alive) reminded me after we failed to make our bid that the Jacoby transfer convention is still on after an interference bid by the opponent.

I nodded to give the impression I knew what she was talking about.

In Charles Town, I have played with a hero of World War II, Fred Mayer. Or as he is referred to in Wikipedia, “Frederick Mayer (spy)”. During World War II Fred parachuted into Austria, then posed as a German Army officer to learn about troop movements near Innsbruck. He was captured and tortured by the Gestapo. Fred was freed in 1945 by American troops and later awarded the Legion of Merit and a Purple Heart by the United States Government. What an honor to sit at the bridge table with an American war hero.

My mother insisted bridge would help me socially in college. That never happened but her investment in lessons is paying dividends now that I am older and retired. Playing bridge has introduced me to a wonderful new group of friends and acquaintances.

Best of all, knowing an opening bid of 2 No Trump promises 20-21 points is considered far more important than knowing how to iron linen napkins or polish silver.