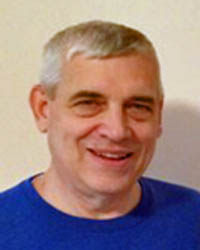 My bridge experience started when my wife, Peg and I took up social bridge in the late 1970’s with new neighbors. After a few years, she wrestled me into playing duplicate at a club. With exactly a 50% game that first night we were hooked. We didn’t play much those first 10-15 years, winning only 10-30 master points per year. No bid boxes, no flighted games, no instructors and Swiss teams were win/losses. One needed to win 6 of 8 matches to get Gold points. Playing at all was a challenge as we both worked and started a family. But in 1988 I was awarded a Gold card.

The things I love about the game are learning something new almost every time I play and being able to play in any top-level event against the best players whenever I choose.

One highlight of my career occurred when playing in Texas in a 1988 Qualifying Swiss team Regional event. Our team barely Q’d 23rd out of 24 to be able to continue, Round 5 was against Bob Hammond and Paul Soloway’s team. We won when I put my partner in a Grand after going down 2 boards earlier in a small slam(ditto at their table). Hammond found the only lead that let it make, which we then won the round by. Round 7 was against Eddie Wold’s team. We beat them too and ended up second overall.
For new players, learn three things, bidding, playing the cards and defending, since that happens 50% of the time.
And have fun.