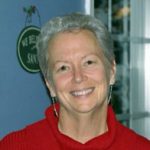 I first played bridge in 1997 after my father and father-in-law both passed away. We wanted an activity we could do with our mothers.So we took night-school classes of bridge. Those classes gave us the basic skills to be able to play social bridge.
However, I only played for a few years. Other than our mothers, not many people I knew actually played bridge.

Then in the summer of 2014 some friends mentioned they were taking bridge lessons from a great teacher in Ocean View. I’ll have to admit I was a bit skeptical about taking lessons. Why would I need lessons? How hard could bridge be? I knew the basics. What else would there be to learn?

However, I decided to try these lesson. What a huge awakening! First of all, Dini Romito is a fantastic bridge teacher! She knows her stuff and presents it in a fun and challenging way. I am still amazed at all she knows and all I have yet to learn. She is kind, encouraging and very supportive!

In October of 2014 she suggested I join the ACBL. I had started playing duplicate in Ocean View and Rehoboth Beach, DE. She didn’t want me to lose the points I had earned.
I’ve had some wonderful partners who have helped me along the way. I didn’t earn those points by myself. Everyone I’ve partnered with has been kind and willing to share their knowledge and love of the game.

I have become obsessed with learning more and more about bridge. My bridge library currently contains 14 books. I read a little from one book, then switch to another, gathering information from well known experts.

One of the things I love about bridge is that you continue to learn every time you play. I still make lots of mistakes. However, I am starting to see them as I make them. Now I need to work at seeing them before I make them!

I never dreamed I would have so much fun and enjoyment from playing bridge.

It has been fun. Some of the highlights are:
• My favorite partner getting deported.
• Driving the wrong way on the turnpike – thank you, Daisy.
• Getting a police escort when we were lost and late for a sectional.
• Taking Hugh Kelsey to brunch at the country club.
• Caddying when Terence Reese was playing.
• Getting rear-ended in Seattle with the English ladies bridge team in the back of the car.
• It is exciting to watch someone as brilliant as Meyer start to swing when he decides we need some good results.
• Losing a partner when I told her the double was ‘do something intelligent’. She took it personally.
• Retiring from bridge at 18 when I realized none of the bridge players in the bar at The London School of Economics ever graduated.
• Playing with a pickup partner at Lancaster and getting him his first gold points when Bobby Levin opened 1NT with a singleton, giving us a top on the last board.

I am surprised by how much I am enjoying teaching bridge. We have fun and laugh a lot. Easier to teach adults bridge than to teach adolescent boys math on a Friday afternoon.

One of the memorable things was playing on bbo with Jerry Blumenthal when he was in Jefferson for several months. It was a lifeline to the world. As sick as he was he sometimes played 55 boards in a day. We ‘talked’ even when we didn’t play.

My next goal is playing in the platinum pairs.