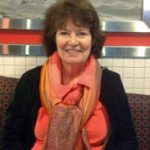 My father was in the Air Force and while stationed in England – he and my mother played duplicate bridge with the locals. It was there that our parents taught my sister and I the basics of bridge as teenagers. It was many years later before I continued to learn about bridge. First party bridge then a few times at the local ACBL duplicate game in Toledo Ohio where I won my first 2 mps in 1988. .. which held for twenty years! ..at that point I seriously began brushing up online w/ BBO so that I could be up to par playing in the local clubs. My first tournament was at The Bridge Boardroom in York Pa. I was paired with a ‘ ringer’ and won that day! It was a huge encouragement since I was so very nervous. From then on I continued playing in the local clubs but really enjoy the tournaments for the competition. I wish to acknowledge Edward Scanlon, owner of the Bridge Boardroom in York. He has been the most influential person in my bridge world. He has helped me when I have made poor judgment and given advise on tournament issues ..he is an excellent teacher on many levels and covers a wide variety of topics / issues that a bridge player needs to know, He is so dedicated to the bridge community and truly helps so many folks.