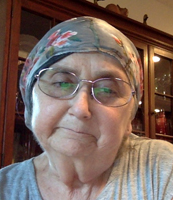 When I was young, board and card games were a staple in our house. My father tried to teach all three of us children to play bridge, but with no interest from us. We had the cheater table cloth with the 4 card major bidding system and leads and more things than I can remember on it. At that age, it just didn’t click for me, although there was always the notion of the game in my brain.

I went on to college and stayed there for a long time, eventually earning my PhD in mathematics and landing a tenured job as Professor of Mathematics at SUNY Oswego. Along the way I focused my non-work time on physical activities, such as running in marathons, horse-back-riding, and flying my hot air balloon .

Fast forward to 2008: I was comfortably employed in my job, but health issues were getting in the way of my physical activities. I was trying to keep in touch with my older brother, Richard, who had learned bridge, and was living in Thailand. The best way to do that was to join BBO, where he was an established member spending his days running team-matches in the main room. Hence my online persona RedCat08 came into existence in 2008 (Red is my favorite color, I am a cat lady as I had 8 cats at that time). I’d get on to chat with my brother, who would make me his co-host so I could chat with everyone. His friends would ask me to be their partner in a team match and I would have to confess that I didn’t know how to play bridge.

Fate stepped in. I decided I would “surprise” my brother by learning to play bridge.
What a clear indication that I really did know nothing. It was around this time that the wonderful Maureen Hall envisioned the BIL, (beginner-intermediate-lounge). It was a privilege to study with the volunteers who stepped forward to run classes for beginners. I was in their first offerings of Bridge 101, 102, 201, and 202. There would have been no way I would get to this point without Maureen and the dedicated teachers and supporters of the BIL. It was quite the switch, being the student again.

Friends in the local Oswego County Bridge led me to face-to-face play. What a difference. Not good, not bad, just different. I let BBO slip away due to declining health. The Oswego Bridge Club is quite small, with many of the folks being life masters. My competitive nature appealed to people in the club who would say, hey Sue, want to go to (insert name of some sectional or some regional here) to which I’d say (given the time and energy), yes!! Especially for team matches. COVID hit, so what to do? With the club shutting in NY state at an appropriate time, I went back to my bridge roots in BBO. Our Oswego club with too few members could not possibly make a virtual club online but the Rochester NY club invited us to play as guests. Thank you for the invite Bruce! It was lovely to return to BBO although I miss face-to-face.

Combining virtual club play, a couple of the bigger ACBL events on BBO, and battling the robots, got me over the 200 point mark to make it to NABC. It is difficult to imagine at age 65, having just made it to 200 master points, that I will make it to the 500 points needed for Life Master, but that doesn’t mean I’ll quit being competitive. I hope to be able, in the future, to combine the best of both BBO and f2f.

I embrace, as should we all, what Maureen Hall says: “Cherish your partner and respect your opposition.” See some of you in the “BBO Bridge Cloud”.