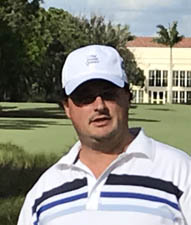 I started playing bridge in 1992 at the fall nationals at the Peabody Hotel in Orlando Florida. Learned the game from my parents Janis and David, won my first regional at the age of 11 which was written up in the New York Times. Got more active in the game when I was a teenager winning an open regional event about 17 years ago. Then college, career and life and golf took over and I’ve been away from competitive bridge for the last 15 years, just playing in unsanctioned games and online. We recently bought a place in Florida where I have resurrected my interest in bridge and started playing again for master points. And after about five sessions I picked up right where I left off and was a much better player than I was 20 years ago. I intend to be more of a presence in the major tournaments going forward. Although of course I will definitely take days off for golf!